Olamide and Wandecoal to feature in Fireboy’s new album- Apollo 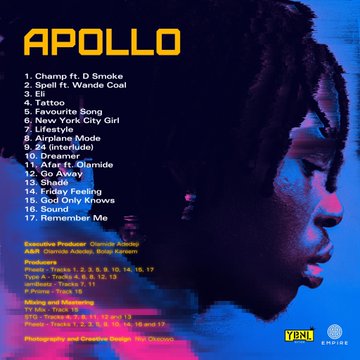 The music sensation made the announcement through his Twitter account, @fireboydml and it read, “My second studio album, Apollo. this was bound to happen. gratitude to God for blessings. gratitude to everyone who worked with me on this album; gratitude to my team (YBNL/Empire), my family, and the kings who blessed this project with their presence. see you on Thursday.”

on 7th August, Nigerian singer, Fireboy DML announced his sophomore album to be released on the 20th of August, 2020. Songs on the album were produced by Pheelz, P.Prime, Type A, iamBeatz. According to Fireboy DML, the album is about evolution, growth, love, and pain. The album is a follow up of his debut album, ‘Laughter, Tears, and Goosebumps’.

Olamide is also set to release his album later this year, the YBNL boss also announced the release of his 11th body of work later in the year.
(Visited 22 times, 1 visits today)